a collection of nonfiction works:

Men from a Broken Country 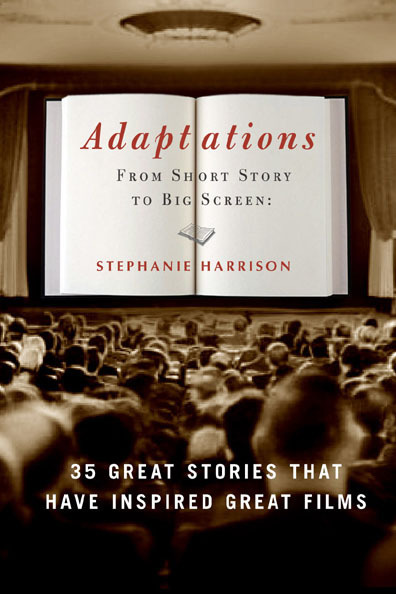 *An Eclectic Collection of Fiction that Inspired Film

from Short Story to Big Screen
by Stephanie Harrison

"Avid readers and film buffs alike will relish Harrison's thought-provoking opus about the process of adapting short stories into screenplays. From science fiction to social satire, this captivating collection of 35 tales embraces literary greats like Chekhov and Cheever and memorable writings long out of print (such as Frank Rooney's "Cyclists' Raid" which became the 1953 Brando classic The Wild One). Harrison devotes a chapter to every imaginable genre, prefacing each with quotes and anecdotes from writers, directors and actors associated with the creative endeavors selected. ... Steven Spielberg, Frank Capra, Alfred Hitchcock and John Ford are among the cast of cinematic personalities in this tribute to the inspiration and perspiration required to turn fiction into film."
—Booklist *Starred Review*

"The best compilation of great short stories in their pre-adapted state, is Adaptations: From Short Story to Big Screen, edited by Stephanie Harrison. Bringing together thirty-five stories from a wide variety of genres and time periods, it's a fantastic survey not only of the possibilities short stories offer, but the breadth of American film inspired by them."
—Bookslut

"It's that rare book that isn't just welcome in the world but one that's long been needed."
—EDITOR'S CHOICE, Buffalo News

"Editor Stephanie Harrison has smartly made a kind of double book. Adaptations can be read as a fascinating anthology of the short story as a form, not simply the "best" literary or memorable popular pieces but an eclectic nature walk through short stories in all their varieties. But for TCM viewers more interesting is the other book, the one about how these stories became films and what occurs along those paths, something Harrison covers nicely in the introductions to each grouped section."
—TurnerClassicMovies.com, Feature

Short Cuts -- "Jerry and Molly and Sam" by Raymond Carver
Blow-Up -- "Blow-Up" by Julio Cortazar
A Face in the Crowd -- "Your Arkansas Traveler" by Budd Schulberg
Rear Window -- "It Had to be Murder" by Cornell Woolrich
2001: A Space Odyssey -- "The Sentinel" by Arthur C. Clarke
AI: Artificial Intelligence -- "Super-Toys Last All Summer Long" by Brian Aldiss
Freaks --"Spurs" by Tod Robbins
The Fly -- "The Fly" by George Langelaan
Re-Animator -- "Herbert West--Reanimator: Six Shots by Moonlight" by H.P. Lovecraft
Stagecoach -- "Stage to Lordsburg" by Ernest Haycox
Smoke Signals -- "This is What it Means to Say Phoenix, Arizona" by Sherman Alexie
American Splendor -- "The Harvey Pekar Name Story" by Harvey Pekar
Ghost World -- "Hubba Hubba" by Dan Clowes
All About Eve -- "The Wisdom of Eve" by Mary Orr
Meet John Doe -- "A Reputation" by Richard Connell
Mr. Blandings Builds His Dream House -- "Mr. Blandings Builds His Castle" by Eric
Hodgens
The Wild One -- "Cyclists' Raid" by Frank Rooney
Tomorrow -- "Tomorrow" by William Faulkner
Bringing Up Baby -- "Bringing Up Baby" by Hagar Wilde
The Last Time I Saw Paris -- "Babylon, Revisited" by F. Scott Fitzgerald
The Swimmer -- "The Swimmer" by John Cheever
The Fallen Idol -- "A Basement Room" by Graham Greene
Memento -- "Memento Mori" by Jonathon Nolan
My Friend Flicka -- "My Friend Flicka" by Mary O'Hara
A Christmas Story -- "Red Ryder Nails the Hammond Street Kid" by Jean Shepherd
Field of Dreams -- "Shoeless Joe Jackson Comes to Iowa" by W.P. Kinsella
Rashomon -- "In a Grove" by Ryunosuke Akutagawa
Dark Eyes/The Lady with the Dog -- "The Lady with the Pet Dog" by Anton Chekhov
Smooth Talk -- "Where Are You Going, Where Have You Been" by Joyce Carol Oates
Smoke -- "Auggie Wren's Christmas Story" by Paul Auster
Jesus' Son -- "Emergency" by Denis Johnson
In the Bedroom -- "Killings" by Andre Dubus

Toadal Chaos
You crossed the line, my friend Ann tells me. I’m visiting her in California. We’ve borrowed a trailer perched on a small mountain so that we can have a quiet place to write. Now I’m trying to explain why I can’t focus, why my nerves are so jangly. Why I can only take short, shallow breaths ...
The Discreet Charm of Chemotherapy
He reads Ragtime while being poisoned by a nurse with a woodpecker tattooed on her ankle, and afterwards he describes this to Lily over hamburgers and beer--he is ravenous (go figure)--and she chuckles...
Waiting For August to End
This is how I remember it: I'm ten or eleven, lounging with my cousins and Aunt Corinne on her sun porch. She's wearing a pink Chanel-style dress, like Jackie Kennedy, and she's sipping iced tea from a hot-pink metal tumbler. She's just discovered, she tells usthat someone is living in her house while she and my uncle are at work. Her crossed legs are bare and one of them jiggles up and down while she talks. As she grows more excited--telling us about her strange feeling, the little things she couldn't put her finger on...
Loading…}