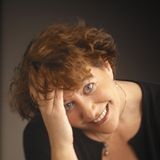 Coming Soon!
A collection of nonfiction works by Stephanie Harrison:
Men from a Broken Country 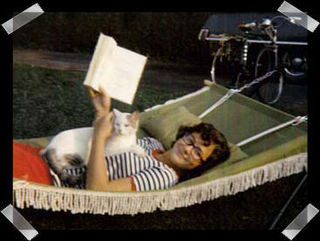 With my cat Bingo in my family's Ohio backyard.

Conversation with My Mother About Personal Statements and Bios

A few days ago I called my mother, complaining that I was having trouble writing yet another personal statement. Writers' colonies, grant applications, marketing materials … everyone seemed to need a statement of some sort. What I needed, I said, was an all-purpose bio-slash-personal-statement-slash-statement of purpose that I could use whenever the situation warranted. The trouble was how to tell the truth and still make myself look good. And humble.

I'd tried everything, I told her, to drill a hole through my writer's block: long walks, bubble baths, wine. Even the chocolate trick was a bust. (Sometimes a pound of chocolate -- as long as it's consumed in one sitting - will get the juices flowing.) The thought of writing about myself had me paralyzed. I'd rather stick my thumbs in a blender than do this, I told her.

"Remember when your sister did that?" she asked. "Someone left the puree button pressed and Jenny set the blades -"

"Mom, I'm speaking metaphorically here." I sat down at my desk and began doodling on a credit card statement. "Would you do it for me?" I begged. "You were an English teacher. You know how these things are done." I reminded her that she'd even ghostwritten my college admission essays

"Probably," I admitted. "I had more going for me then." (In high school I was an honor student. A girl scout. A swimmer. I transcribed novels into Braille for the Library of Congress. I volunteered at the Sight Center.)

"What I need now," I told her, "is someone who can put a positive spin on life since high school. Someone who can gloss over the failed relationships, the failed businesses, the failed diets. Someone who can talk about my (two) unfinished novels without sounding pretentious and delusional. Someone, moreover, who can demonstrate-in a dozen paragraphs or so-that all of this flailing around has really been a master plan to gather-I don't know, can you call it-material?"

"Oh." She sounded worried. "Well, what have you got so far?"

My first short story was filled with atmosphere and big vocabulary words. I remember straining very hard to use the word sepulchre. My freshman English teacher, Mr. Kraynak -

"Was that really his name? Kraynak?"

"Then who was your teacher from West Virginia who pretended to have a British accent?"

"Betty Gretar. She's the one who made us read As I Lay Dying."

"'My mother is a fish.'" Her disapproval was plain as a potato. "Not very accessible, even for Faulkner."

"Maybe," she suggested, "you should start with something more recent than your first short story."

I stared at my chocolate-smudged pages. "Okay," I said. "Here's the part about the classes I took at the Cultural Arts Center:"

I don't know why I took the beginning fiction class at the Cultural Arts Center. I wish I could say I felt driven, compelled, called -- but I don't believe I was. Marion Clover, a thoughtful and gentle woman, teaches these classes at the CAC. When I saw that she would treat my clumsy attempts at fiction with kindness, I began bringing in short pieces I'd written while on the bus to work.

"Those were the ones with the floor plans, right?"

I winced. "They weren't exactly floor plans," I said. "Just sketches." (I'd been going through a phase where I was exploring character through architecture. The class eventually grew weary of stories that included descriptions of south-facing, double-glazed, energy-efficient windows, two-and-a-quarter-inch-wide honey-stained oak floors, curved ceiling soffits. Marion pulled me aside. Is this really about your characters? she asked. Or are you, um, renovating? I was. The kitchen.)

"Maybe you better leave that part out, too," my mother said.

"Why don't you tell them about that George and Claire story? I liked that one. I even used it with my seniors one year."

"I know you did. That was sweet." I tried not to think about the point of view violation in that story. Flipping through pages, I searched for something -- for anything -- I'd written that didn't sound cliched or inane. "Here," I said finally.

In the last year, a close friend of mine has been diagnosed with cancer-and the only thing I can think of to do is write about it. I know the last thing the world needs is another cancer story, but it's helped me understand how my friend might be feeling. And it's given me some insight into why I write: I write so that I can walk in someone else's shoes for a while.

"Okay, you can keep that part in."

"I can?" I put a star by that paragraph.

"Yes, but --" She cleared her throat. "Are you sure you're going at this from the right direction? This is supposed to also be a statement of purpose, right? So shouldn't you, well, state your purpose?"

"My Statement of Purpose?" It sounded like an oxymoron. (On Thanksgiving, while I was reading When We Were Very Young to my niece, I came across the perfect line for my epitaph: 'Last seen wandering vaguely, quite of her own accord'. Hang on to this book, I told Amanda. You may see it referenced in my will.)

"How about this?" I said, spotting something that sounded purposeful.

I originally envisioned Men from a Broken Country as a timely piece of narrative nonfiction that would explore the lives of Somali refugees living in the heartland. That is, until I discovered that I'm not, as one friend kindly and aptly put it, very good at being Girl Reporter. So now it's a much more personal account of my experiences with the Somali refugee community. It's a project that I hope will find its own rhythm-

"You don't sound very sure of yourself, do you?"

I sighed. "Mom, you're not exactly helping." I set my pen down and leaned back in my chair. My doodles were no longer resembling flowers; I thought I could detect a skull and crossbones.

"Wait a second," she said. "Here's an anthology with a story by Joyce Carol Oates and her biographical statement is only two sentences long. Maybe you're doing what you always do. Making this too hard. Remember that model of an igloo you had to do in fifth grade? You decided it had to be life-sized and it took you three weeks and a truck to get it to school."

Finally! Something helpful. "Of course," I said, ignoring the igloo story. "It's like David Lynch's bio in the special features part of the Mulholland Drive DVD: Born in Montana. Eagle Scout. Just two sen-"

She interrupted me. "Wait a second. Never mind. You better not do that."

"Well, you're just not famous enough to be glib."

"If you're not going to write this for me," I said a little frantically, "can't you at least help me move in the right direction? Throw out a few ideas? Brainstorm a little?"

I heard my father in the background. There was a muffled conversation; maybe he was giving her some ideas. After a moment, Mom came back on the line. "Nope," she said. "But your father wants to know if you've been checking your oil."

Toadal Chaos
You crossed the line, my friend Ann tells me. I’m visiting her in California. We’ve borrowed a trailer perched on a small mountain so that we can have a quiet place to write. Now I’m trying to explain why I can’t focus, why my nerves are so jangly. Why I can only take short, shallow breaths ...
The Discreet Charm of Chemotherapy
He reads Ragtime while being poisoned by a nurse with a woodpecker tattooed on her ankle, and afterwards he describes this to Lily over hamburgers and beer--he is ravenous (go figure)--and she chuckles...
Loading…}